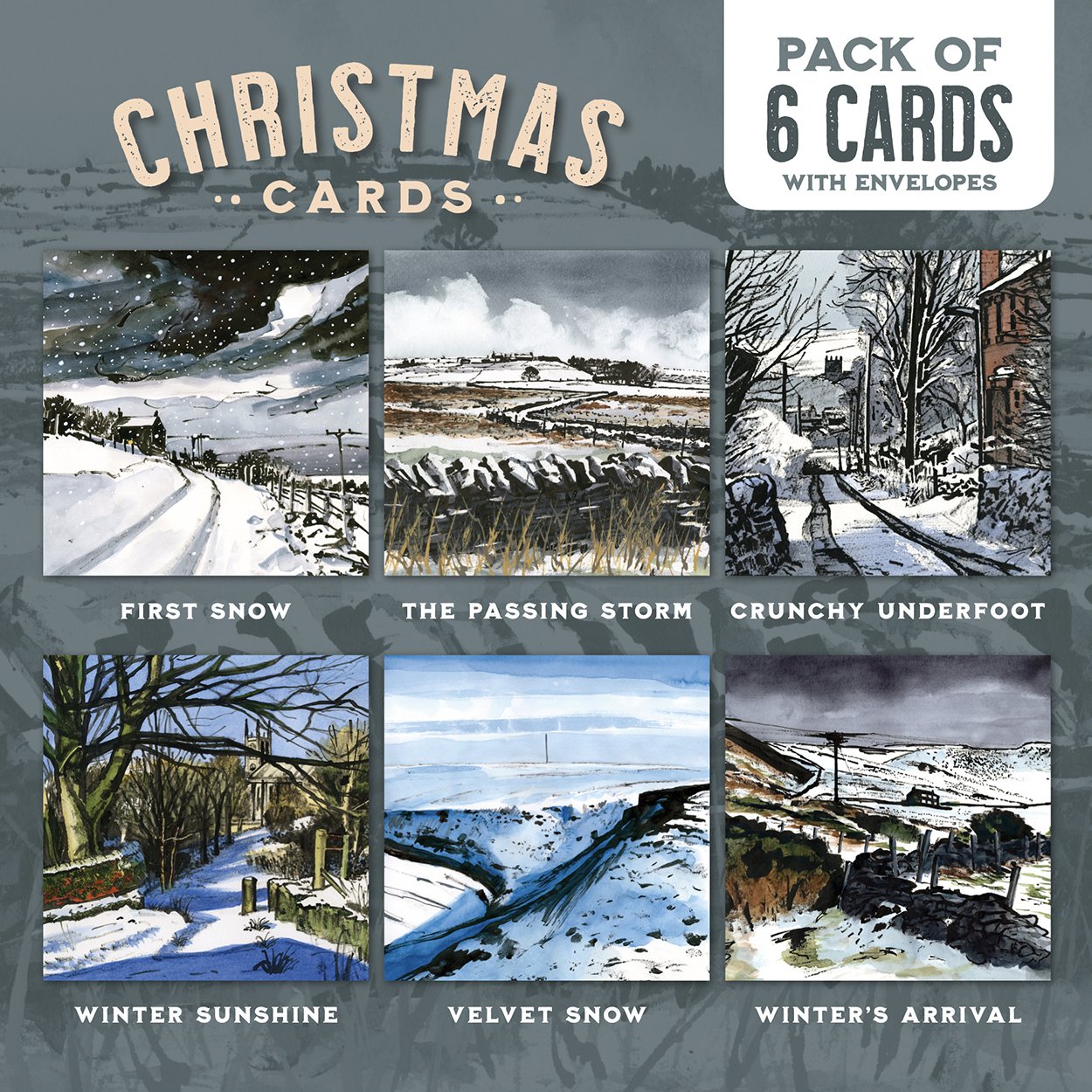 Christmas Cards - Pack of six cards featuring six of my favourite winter scenes reproduced from my original ink and watercolour sketches. The limited edition cards are blank inside for your message and are supplied with envelopes. Click the image above to see the cards in more detail.

The pack of six cards includes:

First Snow - Delph Heights
A sketch I started as Storm Arwen was receding on Heights Lane and then finished at home by a warm fire and candlelight, with a fine glass of red wine. The power was off for a while with us, but a warm glow shone out from Springhead Cottage.

The Passing Storm - Delph Heights
I drew this view of Delph Heights and Edgehill just after brief snow flurries. The snow clouds had moved over towards Marsden and the sun came out for a short while before it started to rain.

Crunchy Underfoot - Slack Gate Lane, Denshaw
Walking past the disused dairy on Slack Gate Lane looking back towards Christ Church, Denshaw. Drawn just as the snow clouds broke and the sun started to come through. The snow had melted slightly and then frozen again with more freshly fallen snow layering it. That crunchy underfoot sound was a real indicator that winter had arrived.

Velvet Snow - Greenfield Brook
This sketchbook drawing was done above Greenfield Reservoir in the aftermath of Storm Arwen on Sunday 28 November 2021. The snow underfoot had the texture of crushed velvet, reminding me of a pair of brothel creepers I used to wear in my punk rock days. The mast on the horizon is Holme Moss, the highest transmitting station in England at 1,719 feet.

Winter’s Arrival - Edge End Farm, Saddleworth
A sketch of Edge End Farm. The light had started to fade over Board Hill Brow and the clouds were moving in. The building, which is on White Brook Lane and sits just below the local ‘Pots and Pans’ landmark, had been empty since the 1950s and is among Saddleworth’s more isolated dwellings. Originally constructed between 1822 and 1850, the building had collapsed and was only recently rebuilt. It’s a real landmark building sitting where it is at 1082 feet.